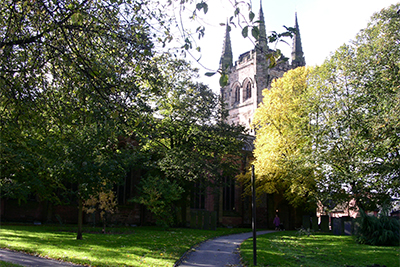 St Editha’s Church
Dating back 1200 years, St Editha's Church is the largest medieval parish church in Staffordshire. Most of the church is 14th century and 15th century, with some 19th century additions, and is a Grade 1 listed building. The present building stands upon the ground where successive churches have stood since the eighth century.

The church was extensively restored during the late 1800s and is well known for its unique double spiral staircase in the tower. This splendid building has served the community, and been the focal point of Christian worship, for over 1,200 years and continues to be the centre of focus for the town's weekly Christian celebrations to this day, together with many civic services including Mayor Making, Remembrance and other popular services. Download St. Editha's leaflet for more information. 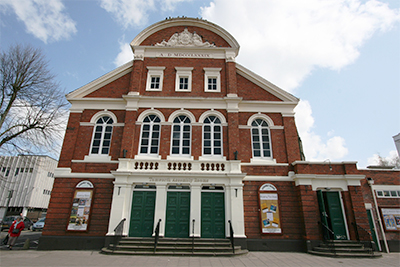 Tamworth Assembly Rooms
Known as 'The Grand Old Lady of Corporation Street', this amazing building was built by public subscription in 1889 to commemorate Queen Victoria’s Golden Jubilee of 1887.

The assembly rooms has been used for everything from assembling gas masks during WW11, to a venue hosting many local groups and household names. These include The Beatles, who played to a sell out audience in February 1963, as did The Rolling Stones in December that same year. The first of many concerts over the years by Marty Wilde and his Wildcats took place in 1964.

The building is currently closed while redevelopment will take the 125-year-old theatre into the future. The venue will undergo a complete transformation, including a new café and exhibition space, new box office, double glazed front doors and the addition of a glass studio space at the side of the building. 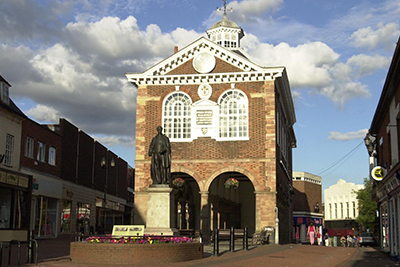 Tamworth Town Hall
Tamworth Town Hall was built in 1701, by Thomas Guy, the then MP for Tamworth. The original design consisted of a single room supported by 18 Tuscan style stone pillars. The area beneath the hall served as the Butter Market and later housed the town’s first fire engine.

The clock on the front of the Town Hall was presented to the town in 1812 by the then owner of Tamworth Castle, John Robbins.

Tamworth's most famous politician, Sir Robert Peel,reportedly read the first political manifesto to the people of Tamworth from the Town Hall window in 1834. The Town Hall is currently owned by Tamworth Borough Council. It contains the Mayor's Parlour and is used for numerous events and civic functions. Download the Town Hall leaflet for more information. 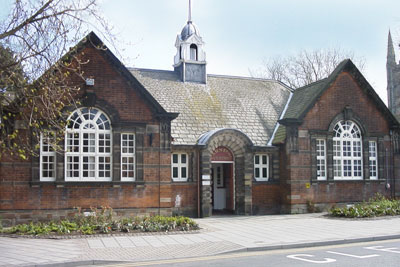 The Free Library (now the Carnegie Centre)
The Carnegie Centre in Corporation Street started life as a free library and public reading room. It was built at the start of the 20th century at a cost of £2,000, thanks to the generosity of Scottish American steel multi-millionaire Andrew Carnegie, who helped create libraries in several towns and cities across the UK and USA.

It was taken over by Tamworth Borough Council in 1917 and when the new, much larger library was built behind it, the centre became home to various voluntary groups and charity organisations over the years.

Today, the building is part of a major development project around the area now known as the 'Enterprise Quarter' and in time is expected to be given a new lease of life as a restaurant. 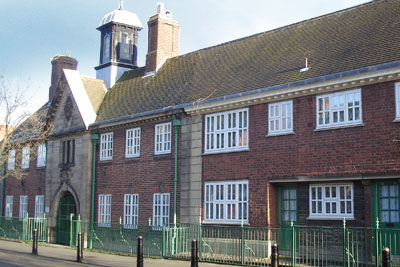 Almshouses
The Almshouses were also built by Tamworth's most famous benefactor Thomas Guy. The original building was established in 1678, at a cost of £200, to provide individual homes and a large central garden for seven poor women. In 1692 the building was extended to allow men to take advantage of the facilities as well, but all people of Tamworth were banned from using the Almshouses in 1708 after Guy's failed attempt to become MP for Tamworth.

The original building was demolished in 1912 and a new Almshouses was established on the same site in a 'Free Georgian' architectural version of the original. They were further amended and extended in 1928 and 1936 and have remain unchanged since. It now operates as the Charity of Thomas Guy, the Almshouses, providing housing for the people of Tamworth, many of whom are elderly and/or vulnerable. 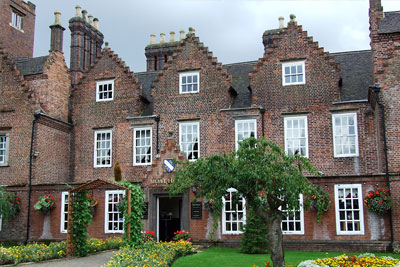 The Moat House, in Lichfield Street,  is a Grade II* historic building located in what were once the grounds of Tamworth Castle in Staffordshire, England. A Gazebo nearby is a Grade II listed building.

It was one of the homes of the Comberford family of Comberford, and is a handsome Tudor Mansion of dark-red brick with mullioned windows and fine chimneys that has been described by one local historian as ‘Tamworth’s Elizabethan treasure.’ Because of its watery site on the banks of the River Tame, it was necessary to build the house on a series of brick arches or vaults. In the Elizabethan period, the Comberfords were Catholics and it was whispered that the oak panelling inside the house hid more than one “priests’ hole”

The long gallery was provided with stone mullioned windows with transoms, looking out over the River Tame, and for the visit of the future Charles I a handsome plaster ceiling was decorated with coats-of-arms illustrating the descent of the Comberford and Beaumont families and their descent from the royal family.

In the 18th century, when the house was owned by the Littleton family, a fine gazebo or summer house was built in the garden. The gazebo is approached by a flight of steps and provides views up and down the River Tame and out across the river meadows.

John Robins bought the Moat House from the 3rd Lord Townshend in 1821, Robins almost immediately sold the Moat House to Alice Woody and her son Dr Robert Woody. In 1833, Lord Charles Vere Ferrers Townshend, brother of the 3rd marquis, bought back Tamworth Castle for the Townshend family, but Dr Woody remained at the Moat House. Dr Woody was still at the Moat House in 1845, and in 1856, when he paid for the bells of Saint Editha’s Church to be rung over two days to celebrate the wedding of Sir Robert Peel, 3rd Baronet, and Lady Emily Hay. In 1863, Woody opened the Moat House for the Tamworth Horticultural Show. At the show, over 2,000 people trooped through the avenue of lime trees to admire the display of flowers, fruit and vegetables. The show included archery, dancing to the strains of the Warwickshire Militia Band, and a fleet of pleasure boats on the waters of the River Tame at the foot of the gardens.

A room on the third floor is known as “Emily’s Room.” Local lore identifies Emily as a young girl.
It is purported that walking the third floor corridors is the ghost of a young girl named Emily, or Amelia. It is believed she was locked in the tower by her father and died in a fire that originated from a burning candle. There is evidence of a fire, but no evidence that it was in that location, or that anybody died in it.

Today the Moat House is being sympathetically restored by its new owners and a place where you can enjoya relaxing drink during the evening in an historic setting. There is also a fabulous function room available for hire on the first floor. For more information: www.moathouse.com

Heritage Trail
The Tamworth Heritage Trail is a colourful self-guided tour of historical buildings and features in Tamworth town centre, highlighting the rich history and heritage still visible in the town today.