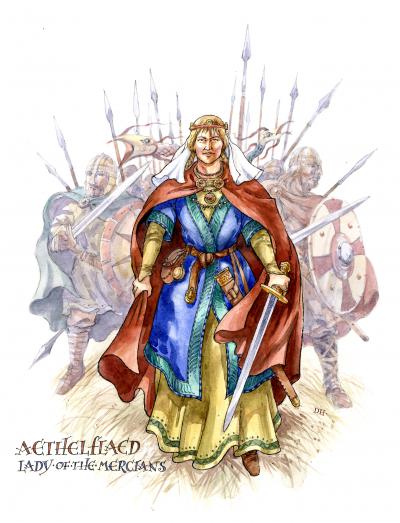 2018 was a very special year in Tamworth as it marked 1,100 years since the death of one of the most powerful and influential women in Anglo-Saxon England.

It was on June 12, 918, that Aethelflaed ‘Lady of the Mercians’ took her last breath in Tamworth – the capital of the ancient kingdom of Mercia - before being finally laid to rest in St Oswald’s Priory in Gloucester, alongside her husband Aethelred. To learn more about the history of Aethelflaed please visit: www.tamworthcastle.co.uk/aethelflaed

The anniversary of the death of Aethelflaed (also known by the Victorian spelling of Ethelfleda) was marked throughout the year in Tamworth with a number of major events, including the unveiling of a new six-metre statue, the creation of the town’s biggest ever piece of community art, a major commemorative church service, talks, a special guided walk, commemorative ale and an academic conference weekend drawing academics and delegates from all over the world.

Here's a helpful video guide so that you can quickly learn about who Aethelflaed was.