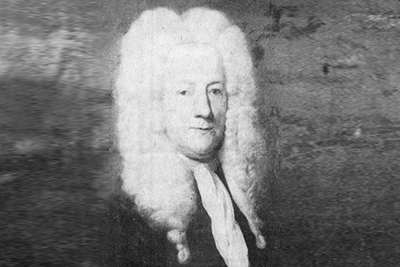 Thomas Guy - Tamworth’s Famous Benefactor (1644–1724)
Tamworth’s famous ‘incomparable benefactor’, Thomas Guy is responsible for two of the town’s most historic buildings; the Almshouses and the Town Hall. In 1677, Guy donated new facilities to Tamworth’s free Grammar School, where he had been educated, followed by purchase of some ground in Gungate, where he built six Alms Houses for poor women. Guy also contributed a large sum for the building known as the Spinning School. Thomas Guy continued his generosity to Tamworth when he funded the building of the Town Hall in 1701.

He served the town as MP until1707, but when the people of Tamworth failed to re-elect him, he became angry at the town’s ingratitude for his generosity. He threatened to demolish the Town Hall and excluded people of the borough from the benefits of his Almshouses, restricting them to people living only in Wilnecote, Glascote, Bolehall, Amington, Wigginton and Hopwas. This restriction still applies in relation to the boundaries of the borough today.

Rejecting Tamworth, he turned his attention to London where he personally financed the building of Guy’s Hospital, Southwark. He died before the project was complete. Download the Thomas Guy leaflet for more information. 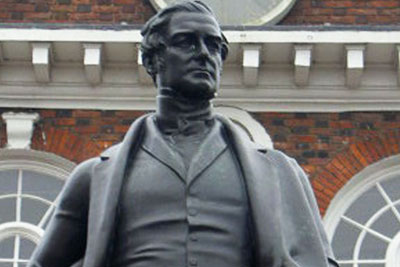 Sir Robert Peel - Second Baronet & Statesman (1788 – 1850)
Sir Robert Peel is one of the most famous and memorable of Tamworth's ancestors. He served as Prime Minister twice and is regarded as the father of modern British policing, as well as being a founder member of the modern Conservative Party. He is played a central role in free trade and set up the modern banking system.

He was the son of Sir Robert Peel, first baronet (1750-1830) who established a new cotton factory in Tamworth, built the original Drayton Manor house and was one of the country’s leading industrialists, employing over 15,000 workers. Young Peel entered the Cabinet for the first time as Home Secretary (1822–1827), where he reformed and liberalised the criminal law and created the modern police force, leading to a new type of officer known in tribute to him as "bobbies" and "peelers". He served as MP for Tamworth from 1830 until his death in 1850. His famous 1834 “Tamworth Manifesto” was the first general election manifesto of any modern political party.

Sir Robert Peel is commemorated with a bronze statue in the centre of Tamworth in front of the Town Hall, dating from 1852. For more information on The Peel Family, follow The Peel Society: www.thepeelsociety.org.uk

William MacGregor - Famous Egyptologist (1848-1937)
One of Tamworth’s unsung heroes is William MacGregor, who served to improve the lives of Tamworth people for more than 60 years. He became a vicar who devoted his life to the people of Tamworth, spending the first 10 years of his ministry visiting the poor. He campaigned tirelessly for every home to have clean water and sanitation despite the strong opposition from the town’s wealthy inhabitants.

He is also remembered as founder of the co-operative society, chairman of the Tamworth Herald, for starting a free library and coffee house, building the first hospital in Tamworth and building two churches at Glascote and Hopwas. He was most famous for his collection of Egyptology, in fact two Egyptian mummies are buried in Tamworth soil. He was also a noted publicist on Greek pottery. His civic life and dedicated service to the people of Tamworth demonstrated he was a man in advance of his time. 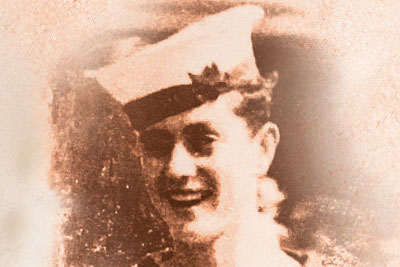 Colin Grazier - Tamworth's War Hero (1920-1942)
Able Seaman Colin Grazier is one of three British servicemen whose brave actions are widely recognised to have shortened the Second World War by as much as two years. Until recently this bravery remained virtually unknown and uncelebrated.

Colin served on board HMS Petard when, in October 1942, he and fellow seaman Lt Anthony Fasson lost their lives retrieving vital German codebooks from a sinking U-boat. The third sailor, Tommy Brown, survived the war, only to die in a house fire while still a teenager.

The precious documents they seized enabled Bletchley Park’s code breakers to crack the Enigma codes and so win the Battle of the Atlantic. Now recognised as a pivotal moment in world history, the mission was cloaked in secrecy for over 30 years and not even their families could be told they had paved the way for peace.

Colin Grazier was born in Tamworth and married only days before he left to go to sea on the mission which would end up being his last. The Colin Grazier Memorial was erected in St Editha’s square in 2002. Learn more about Colin Grazier on the wikipedia page. 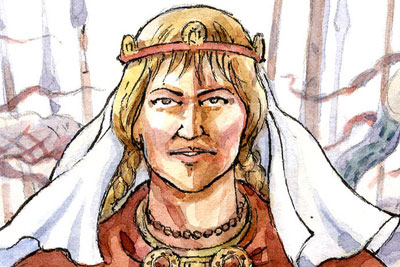 Aethelflaed - Lady of the Mercian's ( c.870 -918)
Ancient Tamworth's most powerful Mercian woman, Aethelflaed, is known to have re-fortified Tamworth in 913. The daughter of King Alfred the Great, she jointly ruled Mercia with her husband, Aethelred, leading the battle against the Danes in the Midlands and the North and working to unite England.

After her husband's death in 911, she became the sole ruler of Mercia and became known as ‘The Lady of the Mercians'. Her death in 918 in Tamworth resulted in Mercia being merged into Wessex. An iconic Aethelflaed Monument stands at the foot of Tamworth Castle just through the Gatehouse and a grand new statue in honour of the warrior will soon be erected outside Tamworth Railway Station.

2018 is a special year for Aethelflaed. Read more here. 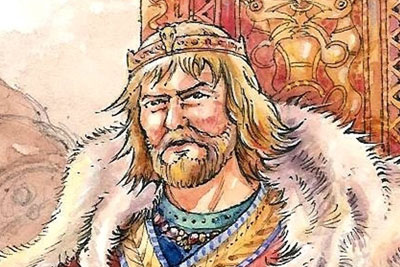 In Tamworth, the king built a ditch that encircled the town on three sides. Looking on a more modern map this can be seen starting on the river bank beside the old Wyburne Lane, crossing Lichfield Street, going around the Castle orchard and across the junction of Aldergate and Gungate to return to the river bank at Bolebridge. It can be seen that the castle walls and town gates of medieval times followed its course, and that the modern town falls within these early defences.